Cafe Butter’s weekend brunch buffet is a hidden gem. When first entering the place, it looks like so many other Prenzlauer Berg establishments: two open spaces on separate levels, neither too big nor too small, lighting that’s a bit on the darker side, and packed full. Nothing mind-blowing.

And then we saw the third level: a small space, in which the food is hidden in plain sight, luring our noses up the stairs with a yummy scent. Up close, the little buffet turned out to be a big surprise: rich, easy on the eyes and tasty as hell.

There’s a distinct order in which one should fill up their plate, starting off with the selection of cheese, salami and salads (greens, beetroot, lentils, potatoes, Caprese). Once the digestive juices are flowing, awaiting are scrambled eggs, sausages and awesome stir fried potatoes. The sweet department has some cereals to choose from, waffles and pancakes, and the German-must-have: apple mousse. Surprisingly though, given the place’s name, sweets were the weakest link of the buffet. Disclaimer: there was no unanimous consensus for the above sentence. 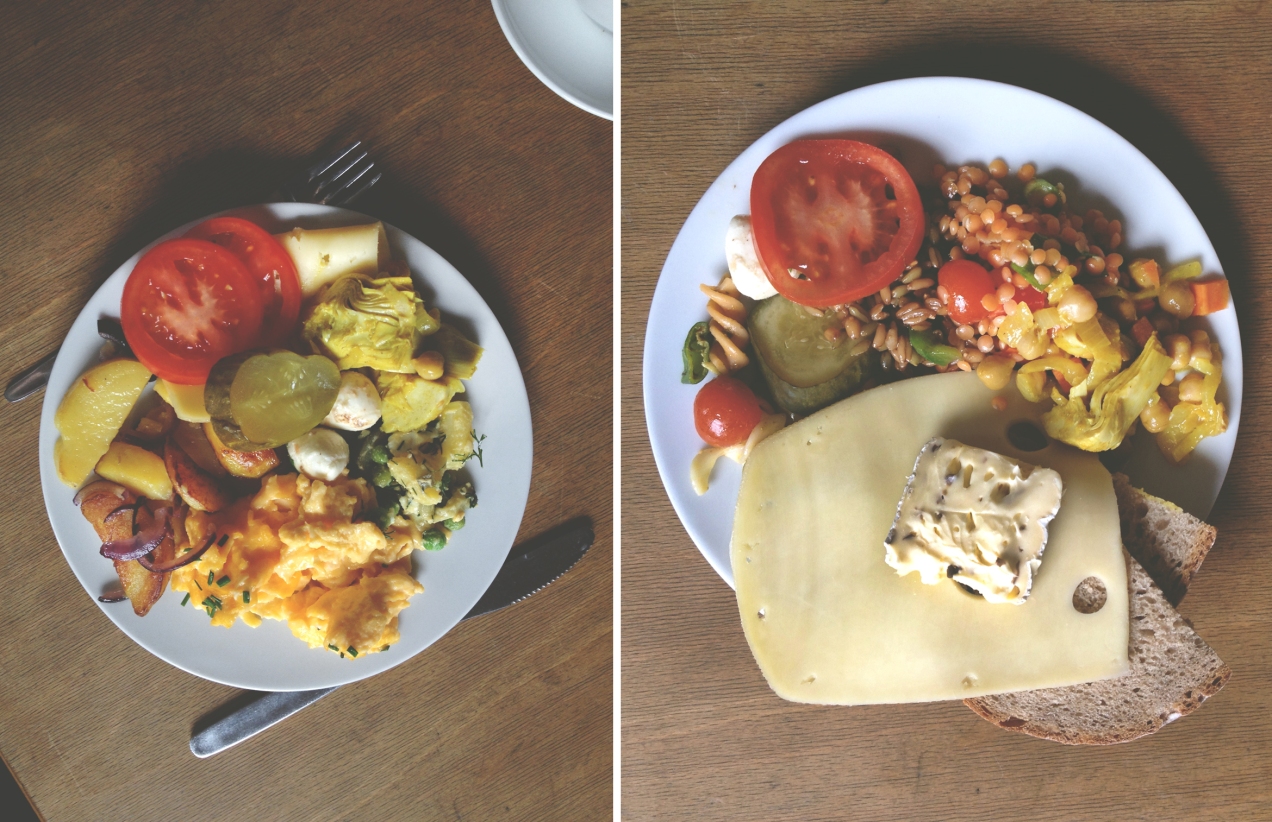 The bottom line: overall great brunch. Can do better in the sweets department

The plate test: we cleaned our plates, went back for more, cleaned them again and.. (you get the hang of it)

Crowd: not a spare chair in sight. P-Berg types, families with babies, groups of friends

Soundtrack: slightly noisy chatter. There might have also been music, but the unnoticeable kind

Pets: brunch-day might be a bit too crowded for medium+ sized dogs 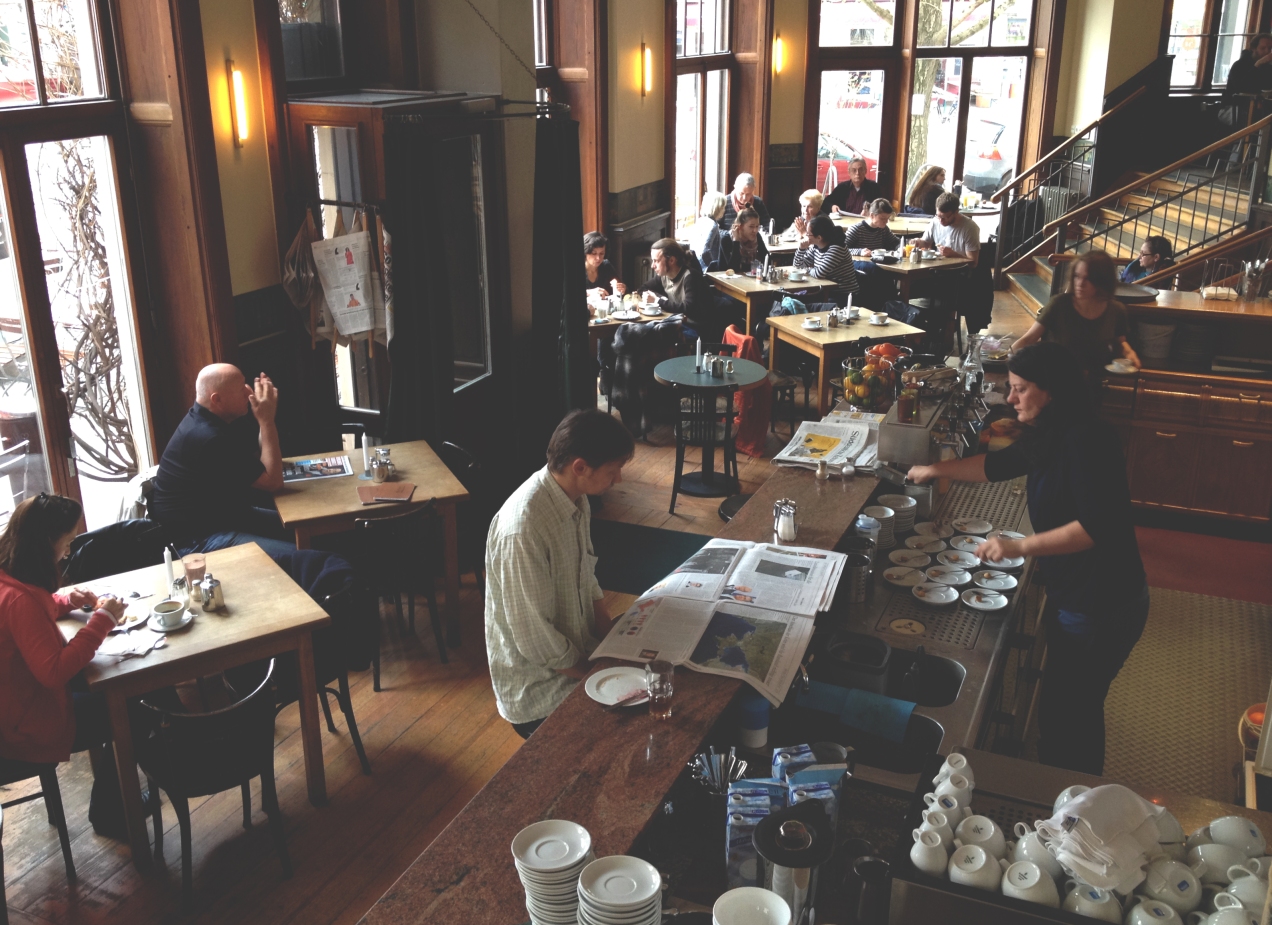 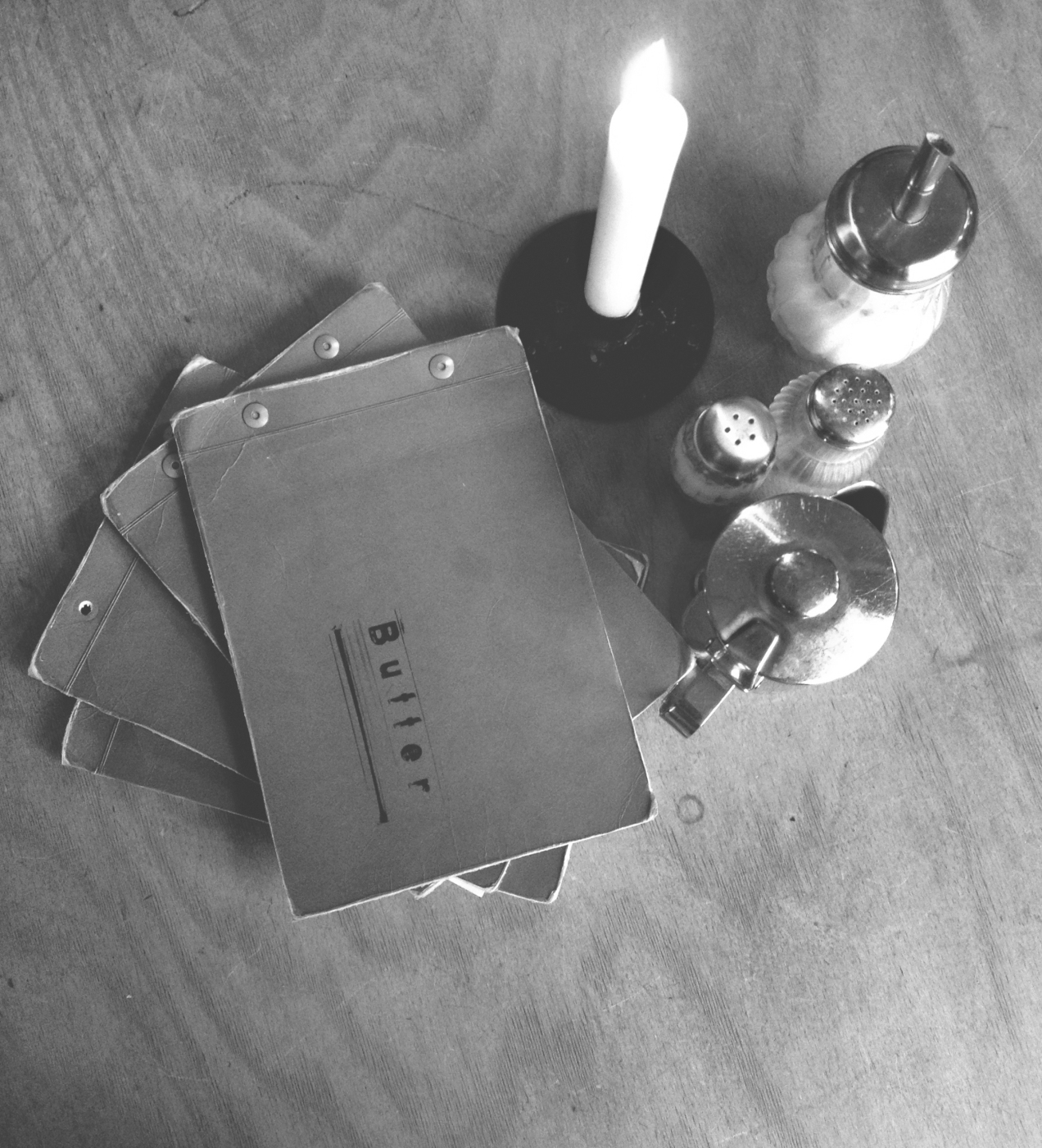 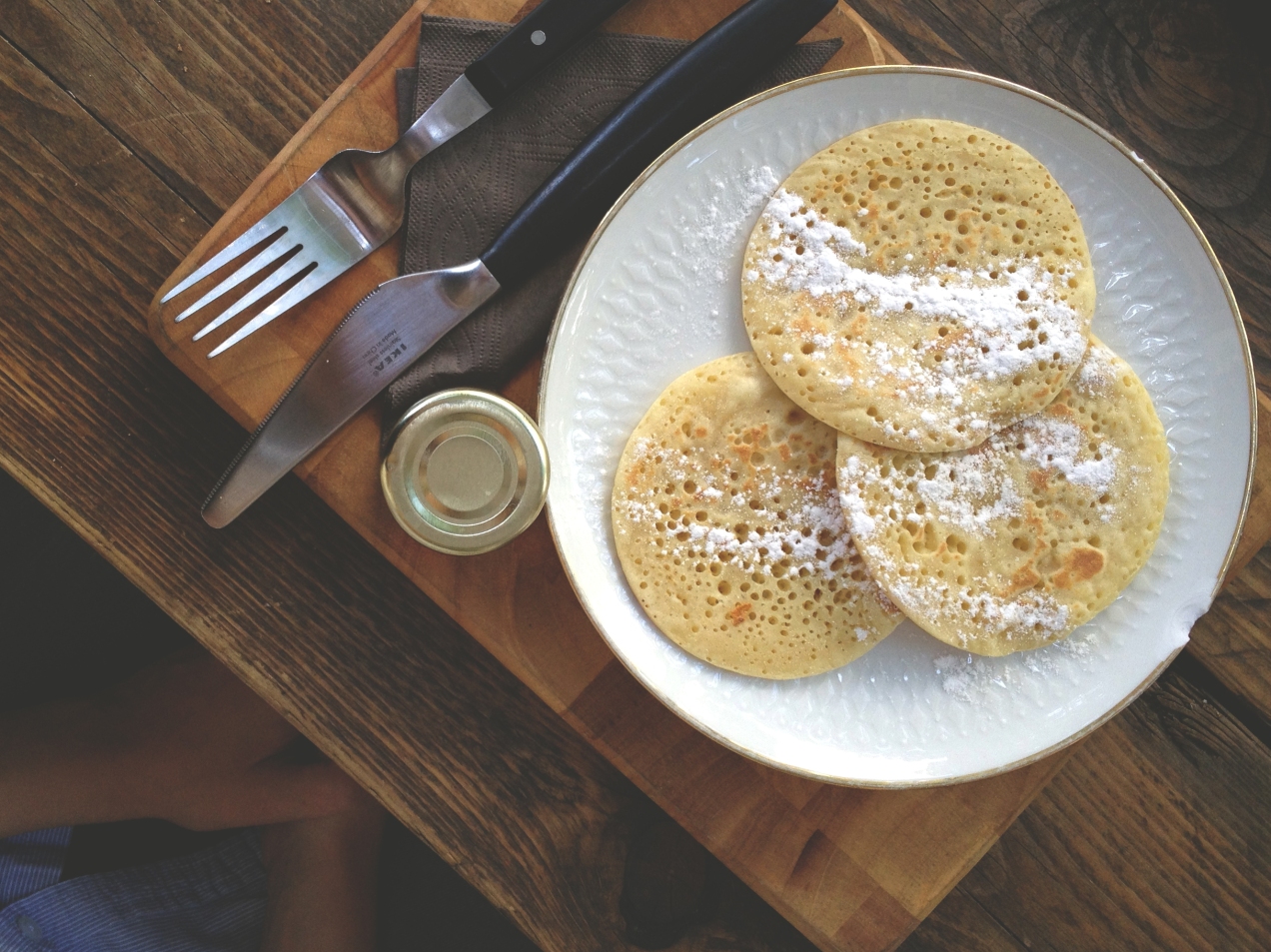 Suicide Sue is an exciting place. Well, first of all, because of the name. That was enough to get us to come. Then the location: a quiet and pleasant street near Helholmtzplatz in Prenzlauer Berg. We showed up on a fair-weather Sunday and sat down around a shaded table outside. Inside there’s a welcoming and cosy space, with a wooden bar in the center and a counter where you order, choose desserts and can track the progress of order.

The breakfast choices run between Sweet (croissant and home-made marmalade), Savory (eggs, sausages and all the rest), pancakes, fruit salad, a vegetarian breakfast and the house special (a meal for two, which we chose in its veggie version). “Sue” prides itself on home-made spreads that are adventurous and superb: avocado and chilli, ricotta and dry tomatoes, beet, horseradish and apples, brie and dates, camembert and berries and list goes on.

Everything is served on wooden planks and in white vials. Simple and beautiful. And not to mention delicious. Since our first visit there we came back for seconds and will be back again. 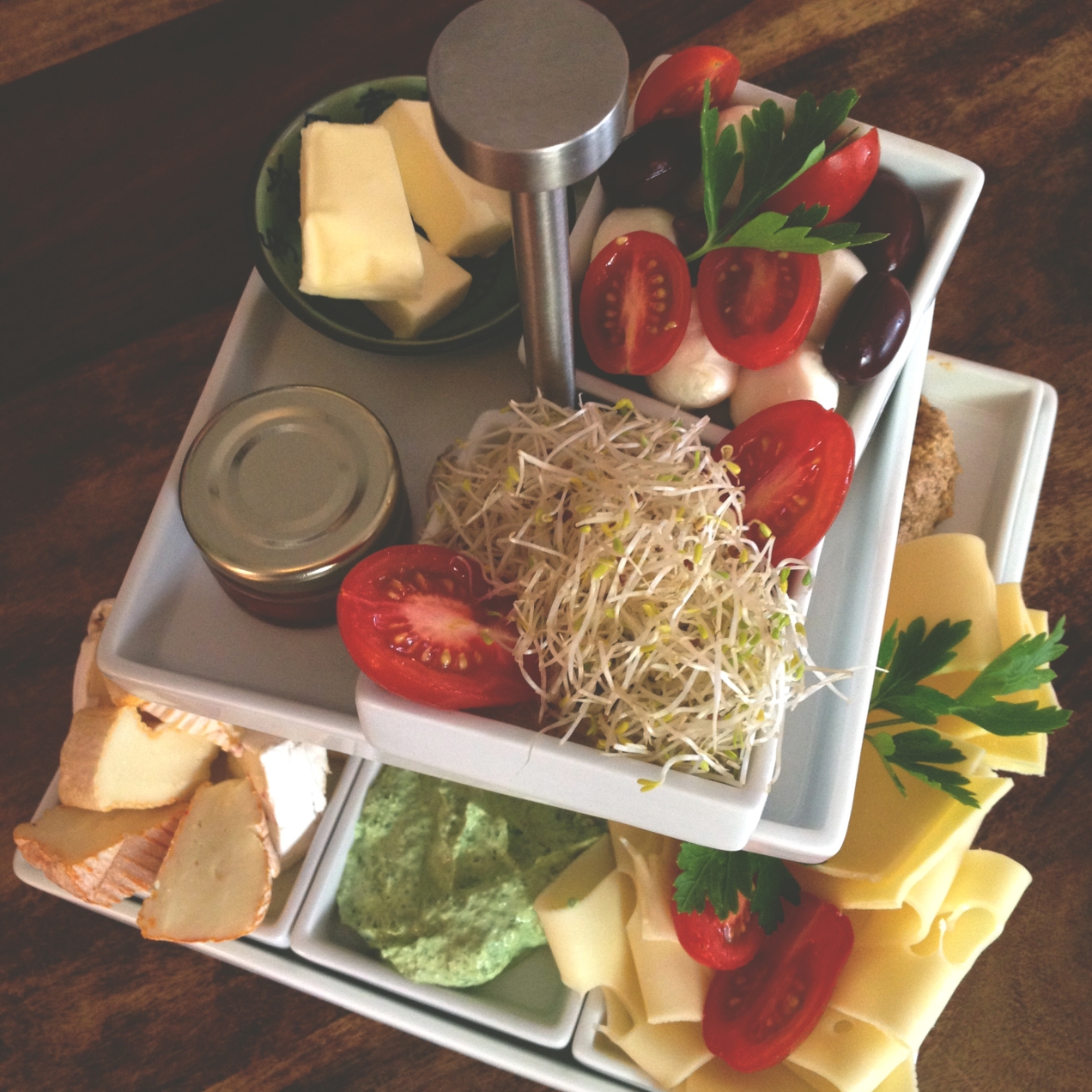 The bottom line: original and marvelous.

Soundtrack: French inside, quiet urban chatter on the outside 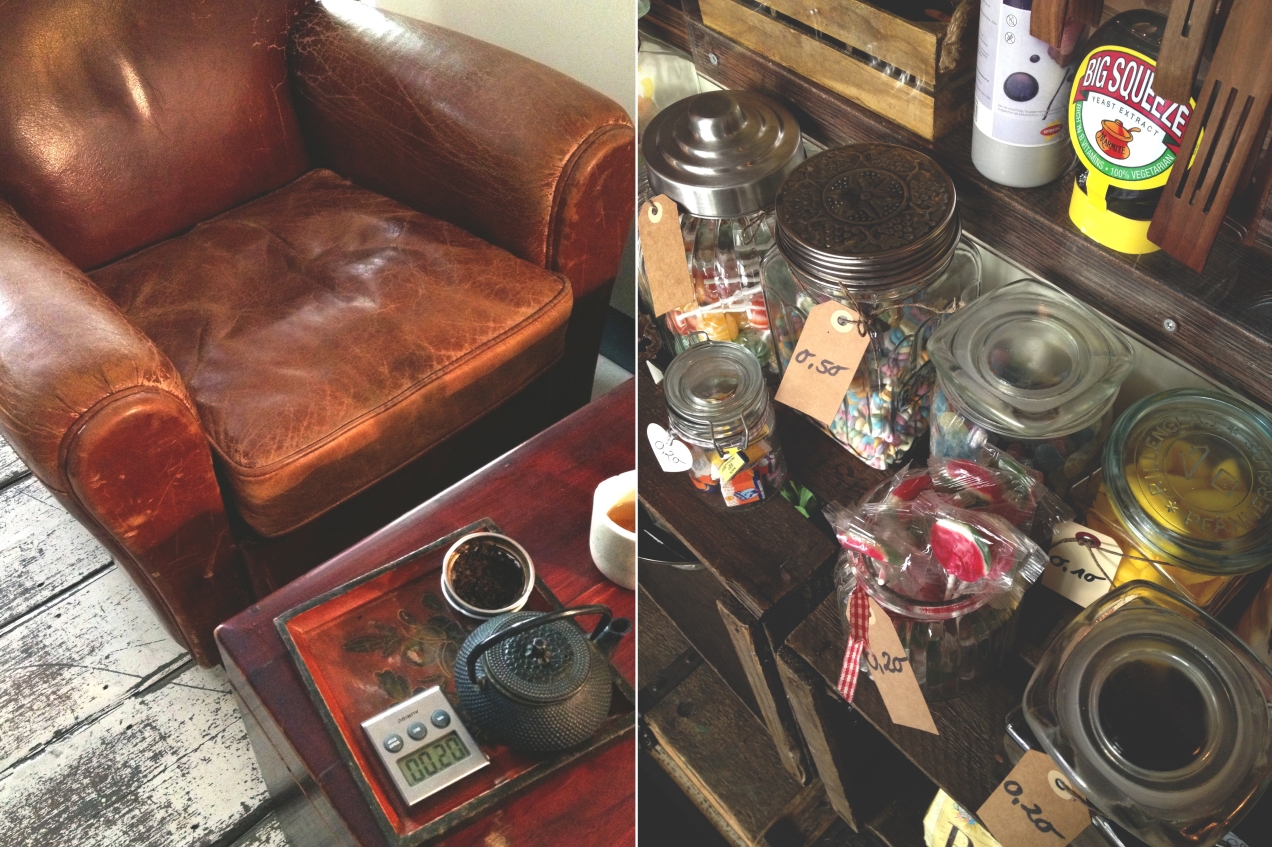 Everything in Nalu diner screams America: Two big spaces with white walls, covered in pictures and posters of american icons, such as Steely Dan; Booths with red leather-like upholstery; Tables with pictures of all the U.S. Presidents; And in the background, american ‘70 and ‘80 music, such as Steely Dan. A soundtrack that gets you dreaming about the big road-trip you’re gonna take, scorching the wide open highways of America in a convertible.

Our breakfast also screamed America. No brunch on the menu per se, but a few breakfast deals that would qualify. Two of us went for the veggie and the third one took the direct approach – straight for the pancakes. The veggie breakfast had a choice of eggs, 2 pancakes and hash browns. After all, it’s not like America to worry hungry stomaches with anything green or fresh. The eggs were standard, the pancakes fatty and round and the hash browns slightly crispy on the outside and soft on the inside. The black coffee, re-filled by the waiter just like you’d expect, was surprisingly good compared to its American counterpart. More than anything, there was much of everything.

Just do yourselves a favor and don’t use the junk wannabe-maple sauce on the table. Ask the waiter for REAL maple sauce. They have it, but charge extra for it.

The plate test: neither was empty. Torn pancakes and egg leftovers

Crowd: young and unified. The presence of only one child was noted

Breakfasts: array of combos which include eggs, pancakes, hash browns and bacon

We were a bit excited going to Al Hamra. From the intelligence we had – a recommendation from a good friend and some googling – we knew it’s an Arabic/Middle-Eastern restaurant, or what the Berliners sometimes refer to by mistake as “Oriental”. Doesn’t matter how you call it, for us it’s home. Since temperatures were still below freezing, the city was covered in snow, and our legs felt like popsicles, we were relieved to arrive at Al Hamra, and be cuddled in warmth and scents from a warmer life.

We pealed off and settled at our reserved table (recommended). Not an easy task, since the place was packed, and even if the two-leveled space were empty, the furniture is packed. The tables are so close you can actually fell human warmth. Like the U-Bahn in rush-hour, but in a good way.

On Sundays there’s a brunch buffet: a colorful selection of delicacies is weighing down two large tables, wrapped in a long queue. During the full length of our stay, about 3 hours (yes, it was that good), there were constantly people standing in line. “Memories from the good old DDR times”, we heard someone joking. We don’t have any memories from the Stasi era, so we didn’t let the long line spoil our mood. Not even the shortage of plates, forks, spoons, and where the hell is the waitress around here? Granted, it took some time to get everything together, but once we managed to fill our plates and try the goods – we had no more complaints.

In addition to the regular Berliner brunch goods, that is cheese, ham and sausages, the Al Hamra buffet had some original (and yummy!) surprises up it’s table cloth: Hummus, eggplant salad, boiled red beats, pickles, mushroom salad, pita bread, other baked carbs and some sweets. One of us really liked the Hummus, the other the eggplant salad, and the third noted the the evening menu has Couscous so we have to come back. We didn’t have too much room left for desert, but that’s ok, since they are definitely not the forte of Al Hamra.

Price: 7.5. All you can eat. One of the cheapest deals in town

Space: crowded. You should reserve in advance and even then – it’ll be packed

Service: problematic ratio between guests and service personal. They were nice and wanted to be helpful, but didn’t really manage to juggle everything

Breakfast: not just the brunch, but also breakfasts by nationalities

Lighting: quite dark but contributes to the cosy atmosphere

Pets: Yes, but only if they’re up to knee-high and well behaved

Summery: we’ll be back!

We’ve heard about the Anna Blume brunch about a second and a half after moving to Berlin (the place is open since January 2005, and managed to gather quite the following), and knew it’s supposed to be something special. We saved it for a special occasion, which finally presented itself: an opening post to our new blog, that will be solely devoted to the marvelous experience of Sunday Breakfast and Brunch in Berlin.

The upside of scheduling a Sunday brunch at Anna Blume is that it’s close enough so the three of us could walk there. The downside is that we knew it was going to be packed. ‘Cause as we mentioned, the Anna Blume brunch is somewhat of an establishment in Prenzlauerberg, and brunch lovers like us fill the area just as much as baby strollers do.

We decided on a strategic meeting point (church of Zion, to remind us where we came from) and started walking. It was cold. So upon arriving to the beautiful corner of Kollwitz and Sredzki, we rushed to squeeze in. The place was full of 4-generation families (grand partent, parents, kids and their iPhones and iPads). Luckily we got a table within minutes, in a dark and cosy nook way in the back.

It was pleasant at Anna Blume. The service was quick, very friendly and efficient (somewhat of a marvel in Berlin), the brunch was tasty and satisfying. As an added bonus we got three glasses of Sekt (bubbly wine) which the waitress gave us by mistake. We drank ‘till the last drop, while watching the crowd change – from hubbies and wives to hipsters with horrible color matching skills. At no point though, was there an empty chair in sight.

The brunch (they call it “Breakfast for 2/4” but don’t be fooled) comes in a pyramid-like structure. Fruits on the top, cheese, scrambled eggs, spreads and veggies on the other two floors. We took the veggie version, but there is also salami in the regular one. On the side – a basket with 3 different types of breads. The food is not original or special, but definitely does the trick. The quantity – a brunch for two for 14 Euro – is enough to feed a hungry couple or a lady-trio. The cakes on display will make you wanna save room for desert. We left happy. An amicable start to yet another frozen Berlin Sunday. Now it’s time for a Schlafstunde.

Music and noise – no music. Acoustics are fine, no need to shout

Light and dark – pale Berliner light comes in to the main hall from the huge windows. The cozy nook is darker

Design – tacky from the ‘80. Lots of red and burgundy

Breakfast – big selection. With or without eggs and salamis

The brunch – a classic of form and substance

Pets – during the summer they can tan outside, but inside might be too crowded for anything bigger than a jack russel.

What else? There’s an in-house flower shop and great pastries and cakes